The JS Giguere of blogging, Matt Welch, has a nifty little piece attacking the virus known as francophobia. Interesting that our relations with the nations that nurtured the 9/11 criminals is more amicable than that with our "oldest democratic ally", especially since the non-discovery of WMD has pretty much vindicated Chirac's position.

I haven't forgotten to comment on last night's debacle at Staples. I'm just more comfortable talking about my beloved Mighty Ducks right now. Once you get past the 100-minute mark of a game, their opponents are toast !!

Posted by Steve Smith at 4:17 PM 1 comment:
BEGALA AWARD NOMINEE: "...many establishment Republicans believe that the criminalization of private gay sex is a legitimate position, even when they personally disagree with it. That's how close they are to the fundamentalist right. That's how little they care about individual liberties. I guess, as so many gloating liberals have emailed me to point out, I have been incredibly naive. I expected a basic level of respect for gay people from civilized conservatives. I've always taken the view that there are legitimate arguments about such issues as marriage rights or military service and so on; and that fair-minded people can disagree...(B)ut something this basic as the freedom to be left alone in own's own home is something I naively assumed conservatives would obviously endorse - even for dispensable minorities like homosexuals. I was wrong. The conclusions to be drawn are obvious."--Andrew Sullivan, disparaging the civilized tendencies of mainstream conservatives over l'affaire Santorum.

Obviously an issue near and dear to my heart: a writer employed by the Hartford Courant was ordered by the paper to cease publishing a blog on his spare time. The writer, Dennis Horgan, complied, even though the contents of the blog didn't conflict with the travel column he was paid to write by the newspaper. His editor, Brian Toolan, asserted an interesting rationale for silencing Mr. Horgan:

"Denis Horgan's entire professional profile is a result of his attachment to The Hartford Courant, yet he has unilaterally created for himself a parallel journalistic universe where he'll do commentary on the institutions that the paper has to cover without any editing oversight by the Courant," Toolan said. "That makes the paper vulnerable."

The editor added that allowing an employee to set up his own opinion blog was a bad precedent. "There are 325 other people here who could create similar [Web sites] for themselves," Toolan said.

So much for the free press. In the meantime, Mr. Horgan (and the others so situated) should discovery the joys of pseudonymous blogging. Let 325 flowers bloom. 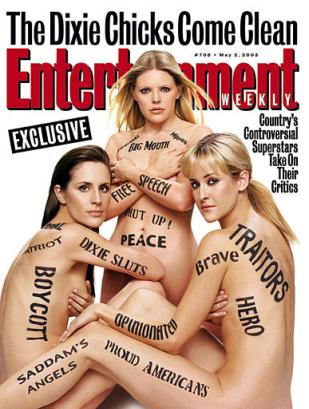 Posted by Steve Smith at 8:35 AM No comments:

Potential Supreme Court nominee Alex Kozinski wrote a dissent so convincing in an appeal of a criminal conviction that the prosecution agreed to dismiss the charges, the L.A. Times reports. The Ninth Circuit judge, as well known for his literary, often ascerbic, opinions as for his conservative leanings, voted to overturn a conviction of an illiterate Mexican defendant charged with smuggling illegal immigrants into the U.S., on the grounds that nine potential witnesses who could have backed up his protestations of innocence were deported before trial, and before his attorney could interview them.

The Times points out that the most telling argument in the dissent came from the sort of typically unusual device that has earned the Reagan-appointee such a cult following among local attorneys:

"Perhaps the most striking part of Kozinski's opinion was a simulated dialogue he created to describe how Ramirez's lawyer might try to explain the decision.

'Lawyer: Juan, I have good news and bad news. The bad news is that the 9th Circuit affirmed your conviction and you're going to spend many years in federal prison.' Then the lawyer gives Ramirez the good news: 'You'll be happy to know that you had a perfect trial. They got you fair and square!'
Ramirez questions this conclusion, but the lawyer explains that government agents 'talked to everyone, they took notes and they kept the witnesses that would best help your case. Making sure you had a fair trial was their number one priority. Is this a great country or what?'
Then, Ramirez asks, 'Don't you think [the jury] might have had a reasonable doubt if they'd heard that 12 of the 14 guys in my party said it wasn't me?' The lawyer responds: 'He-he-he! You'd think that only if you didn't go to law school. Lawyers and judges know better.' "

As a result, the U.S. Attorney, fearing that the full 9th Circuit would agree to rehear the case and establish precedent effecting other convictions involving potential witnesses who had been deported, acceded to a motion to dismiss the case.
(Note: former Kozinski clerk Eugene Volokh, subject of this piece last month, has more on this dissent)

Posted by Steve Smith at 8:30 PM No comments:
While other commentators, left and right, opine on l'affaire Santorum, now is as good a time as any to revisit last month's GOP jackass, Sen. Norm Coleman (R-Minn), who gets taken apart here by Al Franken.

Posted by Steve Smith at 6:24 PM No comments:
Minnesota 119, Lakers 91:
Perhaps the most ominous news for Laker fans since October, 1991: Kobe Bryant claims he has a "jammed rotator cuff". 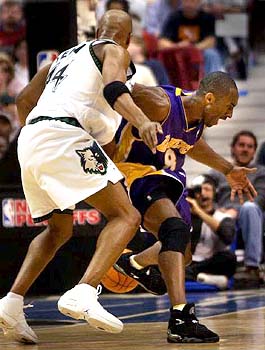 Nothing else to say, really; the T-wolves shot lights out in the first three quarters, someone named Troy Hudson scored 37 points for Minnesota, and Shaq clearly was still affected by the emotional swings of the past week. Game 3 is tomorrow at Staples, and the Lakers are not likely going to stink up the arena two games in a row.

How the mighty have fallen--I knew that Hitchens had fallen a long way, but this story is truly sad. No matter what your opinion of the man is, no one should gloat over his misfortune. 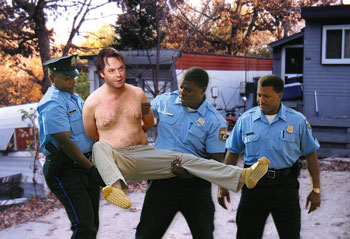 Happy Easter, indeed--Political Aims reports that Tom Daschle's bishop is attempting to force the Senator to refrain from describing himself as a Roman Catholic, due to his stand on abortion rights.

Posted by Steve Smith at 10:38 AM No comments:
It's been over a month, and we still haven't found any of Saddam's "weapons of mass destruction", but we do have some idea about the most devastating weapon in use against Coalition forces in our latest adventure: the Patriot Missile. The LA Times reports this morning that the Patriot, which is typically used to bolster the arguments of supporters of missile defense systems, is coming under scrutiny again after three separate "friendly fire" incidents:

The Patriot attacks on allied planes were particularly puzzling given that throughout the war, no Iraqi aircraft were aloft.

"Why were the Patriots even shooting at aircraft?" asked Philip Coyle, former assistant secretary of Defense and director of operational testing and evaluation for the Pentagon. "We ruled the skies in Iraq, so almost by definition any aircraft up there was either ours or British."

The Patriot system, designed in the 1970s to shoot down enemy aircraft, should have been able to distinguish between relatively slow-moving planes and speedy rockets fired by Iraqi forces, Coyle said.

"If they can't tell the difference between a missile and an airplane, then they need much more restrictive rules of engagement," he said.

The Pentagon claims that nine Iraqi missiles were shot down by the missile, which was revamped after the first Gulf War, but similar claims about its effectiveness were made last time as well, only to be later discredited.

Posted by Steve Smith at 7:43 AM No comments:
Labels: Iraq

Lakers 117, Timberwolves 98: I have a hard time believing the T-Wolves are going to be this easy. The Lakers are going to have to fight complacency for the rest of the series, or at least until Minnesota reclaims the home court edge. Game 2 will be indicative of whether a four-peat is in the cards: another Laker blow-out, and a sweep will be in the works, whereas a Minnesota win puts the pressure on the Lakers to hold serve in LA or face a long series, which they can't afford right now.

Posted by Steve Smith at 8:59 PM No comments:
Quickie Trivia Question: Name the three people who are pictured to the left of Satan in the ad on p.28 of this morning's L.A. Times?

Posted by Steve Smith at 1:07 PM No comments:
Happy Easter, or Happy Palm Sunday, depending on what church you belong to...

Laker game in two hours, so leave me alone.