Posted by Steve Smith at 4:05 PM No comments:
Matt Welch, who's written the book on what a virulent authoritarian streak John McCain possesses, strikes again. Concerning McCain's support/authorship for the plan to increase troop levels in Iraq, in absolute defiance of public opinion, Welch notes:

The significance of the McCain Plan transcended horse-race politics. It was a microcosm of the Arizona senator’s largely unexamined philosophy about the proper role of the U.S. government. Like almost every past McCain crusade, from fining Big Tobacco to drug-testing athletes to restricting political speech in the name of campaign finance reform, the surge involved an increase in the power of the federal government, particularly in the executive branch. Like many of his reform measures—identifying weapons pork, eliminating congressional airport perks, even banning torture—the escalation had as much to do with appearances (in this case, the appearance of continuing to project U.S. military strength rather than accept “defeat”) as it did with reality. And like the reputation-making actions of his heroes, including his father, his grandfather, and his political idol Teddy Roosevelt, the new Iraq strategy required yet another expansion of American military power to address what is, at least in part, a nonmilitary problem.

In short, McCain would represent a continuance of the Big Government conservatism championed by George Bush, not a new direction.
Posted by Steve Smith at 10:57 AM No comments:

A good analysis of why the next Republican to be elected President will likely continue shifting governmental policy to the right on abortion and birth control, regardless of whether they're pro-choice (Giuliani), pro-life (McCain), or whatever position happens to be convenient for the time being (Romney). An unwillingness to buck the party's base will probably extend to lower Federal court nominees as well, but the article is less convincing on the subject of the Supreme Court.

It is correct that when Republican Presidents have focused on ideology over competence, they've gotten what they wanted, as the Rehnquist, Scalia and Thomas selections indicate. But unlike other judicial nominations, the Supreme Court focuses a great deal more public attention, and the political temptation to court a faction outside the party's base is usually too important to resist. The five previous Republican Presidents each nominated justices who were either liberal (Brennan, Stevens, and Blackmun) or right-centrist (Stewart, O'Connor, Powell, Souter and Kennedy), each of whom played a role in enacting, or reaffirming, Roe v. Wade, and even the current occupant was more than willing to nominate a less-than-ideological pick (Harriet Miers) the last time out. Six of the nine judges who ruled on Roe were GOP appointees, four of them by Nixon, and seven of the nine replacements for those justices were nominated by Republican, anti-abortion Presidents. And yet, Roe still stands, thirty-four years later, sturdy as an oak, and unlikely to be overturned by the Supreme Court anytime soon, regardless of whom President Giuliani or McCain nominate. [link via Tapped]
Posted by Steve Smith at 9:03 PM No comments:
Play Ball:

--Tommy Lasorda, according to the soon-to-be-published memoirs by "Hollywood Madam" Jody Babydol Gibson. Lasorda is denying the entire account.
Posted by Steve Smith at 8:45 AM No comments:

Atrios' "Wanker of the Day" has long gone from being a biting slam at a perceived enemy, to a backhanded honor at a foe whose words have cut too close to the bone. It's the lefty version of Andrew Sullivan's old "Begala Award" or "Sontag Award," which the Brit would give to honorees back before he discovered the Bushies ran torture camps. In other words, it's an honor to win the damn thing; only pundits and bloggers who won't shill for The Cause get so recognized.

Today, the WOTD went to Richard Cohen, for a post-Oscar column chastising his brother pundits for labeling Al Gore as a prevaricator and exaggerator during his Presidential run in 2000, and all but calling the former Veep a hero for his patience and integrity. What's wrong with that, you may well ask? Well, according to Media Matters, a website whose typical post goes something along the lines of "Giuliani Interviewed by ABC News, Not Asked About Bernard Kerik or His Three Wives," Cohen didn't mention that he too was critical of Gore during the 2000 campaign. Its examples: that he criticized Gore after the first debate for implying that he had visited the site of Texas wildfires with the head of FEMA, when, in fact, he had only visited the state of Texas with an assistant head, and that in two 1999 columns written more than a year before the election, Gore seemed to him to be uncomfortable in his own skin.

To show how exactly wankerific Cohen is, Media Matters went so far as to point out that Cohen had specifically exonerated Gore of the charge of him being a liar, discrediting some of the more bogus charges against the Vice President during that election. But Atrios either ignores that part of the post, or doesn't get this whole "nuance" thing, and gives Cohen his eighth WOTD, many for reasons just as specious and petty (including this column, in which the evil pundit comforts a girl who dropped out of school after failing algebra).

So in the world of Prof. Black, anyone who has ever said anything critical about Al Gore is not only immediately suspect, but a "wanker" to boot. Don't like him picking Joe Lieberman as his Veep? Wanker. Thought his dithering response to the recount in Florida cost him the election? Wanker. Hold the mistaken belief that his stage moaning and mannerisms helped him pull defeat from the jaws of victory in his first debate with Bush? SuperWanker !!!

I believe that Black originally desired that the WOTD Award be cutting and incisive, instead of a cheap stunt to avoid actually posting something thoughtful and substantive, which Kevin Drum or Digby do almost every day. I think a certain laziness creeps in when you run one of the uberblogs, a temptation to just go through the motions and belch out random "Wanker of the Day" or "Heh. Indeed" or even just "Threads," mixed in with a link from Media Matters or a clipping from Glenn Greenwald or Tom Maguire (and to understand the full extent of the falloff in quality, take a look at Eschaton in the week before the onset of hostilities in Iraq, here). You already have the traffic coming in, so why bother giving a rat's ass if what you're doing is elevating the public discourse.
Posted by Steve Smith at 9:14 PM No comments:
It seems that being tougher than deer jerky on the campaign trail is more important than attending junkets with Tavis Smiley, Cornel West and other blowhards. In a little over two weeks, Obama has obliterated Clinton's lead among African-American voters, halving her overall margin among Democrats.
Posted by Steve Smith at 5:55 PM No comments:
The good old days, before the blogosphere, back when debate was polite, civil and respectful:

From the coverage of the Democratic Convention, August, 1968.
Posted by Steve Smith at 3:16 PM No comments:
The fact that NBC is willing to spend $10 million on a reality show concerning Posh Spice's move to Los Angeles is disturbing on so many levels, the least of which is that it will parade before the world some of the lamest parasites and wannabes of my hometown. Why are all the Brits who try to crash Hollywood (or the Big Apple, as Toby Young so deliciously recounted) such pathetic losers? Why can't they all be like Dame Helen? Oh well, I guess the spotlight can also be the best disinfectant....
Posted by Steve Smith at 2:56 PM No comments:
The sort of advertising In-N-Out couldn't hope to buy: 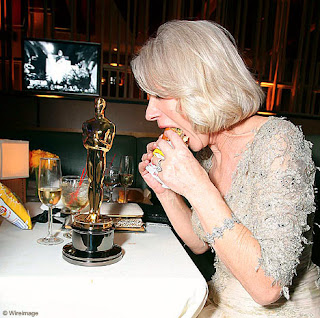 But no fries with the Double-Double? And is that a bag of Lays next to the sparkling wine? That's a combo that will send even a Queen to an early grave....
Posted by Steve Smith at 9:13 AM No comments:

According to a blogger who was offered the position before Ms. Marcotte, the Edwards campaign knew exactly who it was they were hiring when they made the decision. That really doesn't speak well of their political acumen.
Posted by Steve Smith at 5:31 PM No comments:
Newer Posts Older Posts Home
Subscribe to: Posts (Atom)