This article is a few years old, but I thought it worth sharing: it's the story of William Zantzinger, one of the subjects of this song:

Posted by Steve Smith at 2:05 PM No comments:

The Joys of Netflix: Sinking a presidential campaign is now only a mouseclick away...but lets hope the MSM is more aggressive this time than they were in 2000, when they let this story slip through the cracks.
Posted by Steve Smith at 8:50 AM No comments:

A good example of why you should never combine drinking with blogging, here. Apparently, the writer believes that the reason the Lakers didn't win the NBA Championship this season is that Kobe is a lazy n*****.
Posted by Steve Smith at 5:16 PM No comments:

The Netroots, in a nutshell:

The most significant fact of American political life over the last three decades is that there is a conservative movement and there has not been a liberal movement. Liberalism, to be sure, has all the component parts that conservatism has: think tanks, lobbying groups, grassroots activists, and public intellectuals. But those individual components, unlike their counterparts on the conservative side, do not see one another as formal allies and don't consciously act in concert.If you asked a Heritage Foundation fellow or an editorial writer for The Wall Street Journal how his work fits into the movement, he would immediately understand that you meant the conservative movement. If you asked the same question of a Brookings Institute fellow or a New York Times editorial writer, he would have no idea what you were talking about.

The netroots have begun to change all that. Its members are intensely aware of their connection to each other and their place in relation to the Democratic Party. The word "movement" itself--once rare among mainstream liberals--is a regular feature of their discourse. They call themselves "the people-powered movement," or "the progressive movement," or, often, simply "the movement."

--Jon Chait, TNR [May 1, 2007] Chait touches on all the reasons I feel uncomfortable with "the movement," even as I appreciate the gains it has helped progressive politics make in the last few years: the tendency towards group-think and the party line, the vapid sloganeering, the disinclination to discuss (or write about) public policy, and the vilification of those with whom you disagree (and TalkLeft has a good critique of some of Chait's specific points).

Perhaps the most telling observation Chait makes is that the netroots are the mirror image of the propoganda machine that brought the right wing to power (minus, of course, a liberal version of Fox News). We forget at our peril that it isn't simply Republican policies that have damaged America, both internally and in our world standing, but also its destructive philosophy of governing and campaigning. There is nothing to prevent the Democratic Party from becoming as corrupted and discredited as the Republicans unless they repudiate the destructive behavior that has become rewarded by the system in the last twenty years. Instead, the netroots seem more inclined to emulate that behavior.
Posted by Steve Smith at 3:33 PM No comments:
My nephew, Charles Ruderman, attended his first Dodger game last night, and it seems he had a good time... 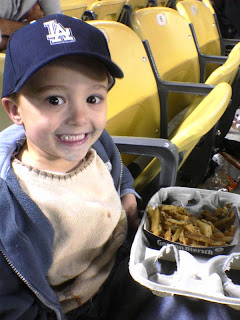 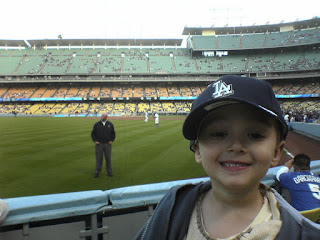 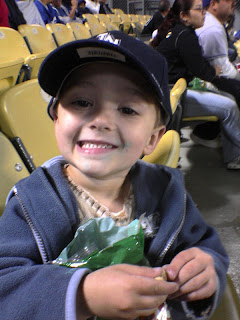 Pics compliments of his Uncle Jimmy...the mess on his face can be blamed on the Dodgers, who beat Arizona, 2-1.
Posted by Steve Smith at 2:17 PM No comments:

Today is the fourth anniversary of the official end to the war in Iraq, the date that America "accomplished" its "mission." Where will you be commemorating Uno de Mayo?
Posted by Steve Smith at 7:38 AM No comments:

Kevin Drum points out something that has been obvious to me for a few years: kids today are just smarter than I was at the same age. Or, they have earned a heckuva lot more credentials in the academic sphere than I had when I got accepted to Reed College twenty-six years ago(with Berkeley as my "safety school," available when I divorced myself from all Portland ties after my freshman term). I was a B-student at Harvard High, with good-but-not-spectacular SAT's, letters in track and cross country, and special distinction ranking in forensics. My community involvement was minimal, to say the least; other than volunteering on a couple of political campaigns, there wasn't anything worth mentioning.

Today, those credentials would barely get me into a state college, at best. Of course, I would be more motivated to improve my qualifications were I a teen today, but the spectre of incurring close to a half million dollars in student loan debt might have soured my ambitions in that regard. In any event, the closest I could get to Berkeley now is watching the Golden Bears at 14-Below.
Posted by Steve Smith at 11:18 PM No comments:
Presented, without editorial comment:

Speaking of which, last week we heard the heartbreaking news that Natalie Nelson is engaged. And not to some rich fratboy a-hole, neither, but to SC's starting center last season, who was just picked up in the second round by Carolina. Congrats to the lucky couple, and CRAP !!!
Posted by Steve Smith at 11:51 AM No comments:
Newer Posts Older Posts Home
Subscribe to: Posts (Atom)