My college football blog, Condredge's Acolytes, is going to start covering the NCAA Tournaments in basketball and hockey. Since it's a collaborative site, I welcome the contributions of any who have two cents they'd like to put in.
Posted by Steve Smith at 1:59 PM No comments:

Best news of the day for Democrats: Dick Morris is predicting a Bush landslide.
Posted by Steve Smith at 4:43 PM No comments:
What to do, if the goals of fighting terrorism and fighting Saddam conflict? Well, if you're this President, to hell with 9/11, you give this guy a pass, and he ends up killing several hundred people in Iraq.
Posted by Steve Smith at 2:16 PM No comments:
Labels: Iraq
Slate takes John Kerry to task for "flip-flopping", a meme hatched by Karl Rove, et al. Most of the examples are bogus, or can be easily explained, but the question I have is, who f---ing cares? "Flip-flopping" is an attack that only resonates in primary contests, when you are trying to convince base voters that the other guy is insincere. In general elections, it's a loser issue, the type of thing that people who don't like you and won't vote for you anyway will use to rationalize their votes.

One example of that attack failing miserably was Jerry Brown's reelection bid in 1978. Brown turned the entire dynamics of that election on its head by changing his position on Proposition 13, which he had fought against when it was on the June 1978 ballot. After the initiative passed, Brown suddenly became its biggest supporter, defending its constitutionality in the courts, and earning kudos from Howard Jarvis in the process. His opponent, Evelle Younger, who had led in the polls, made Brown's "flip-flops" on that and other issues the centerpiece of his campaign. The voters, instead, returned Brown to office by an overwhelming margin. Clinton's strategy of triangulation after the 1994 elections is another example of how a politician who changes his position on issues not only survives, but thrives before the electorate.

One of the dirtiest secrets in politics is that voters in a democracy not only tolerate a politician who changes his mind, they demand it. If swing voters are unsettled by Iraq or the economy, they are not going to give a rat's ass whether Kerry changed his mind about welfare reform in the mid-90's. And since many of those same voters performed the same "flip-flops" over the Patriot Act and the war, it doesn't do the Republicans any good to rub their noses in it.
Posted by Steve Smith at 12:22 PM No comments:
Labels: Iraq
WACK JOB WATCH: James Lileks jumps the shark here, with a pitiful claim that supporters of Kerry are objectively pro-terrorist. And a Republican Congressman goes one-up on Move On, comparing Kerry to Adolf Hitler. Oh, yeah, he's "French" looking, too. Also, Donald Luskin links to a clearly bogus "corrections" site for the New York Times, fooling (among others) Mickey Kaus. Lastly, Ilsa, She-Wolf of the S.S. has her unique take on the latest Mel Gibson movie; no surprise here, she loves it [link via Pandagon].

UPDATE: A reader (Kaus, actually) writes in to explain to your ignorant correspondent what "doppel" means. Turns out he wasn't fooled, but I was. That, and the fact that I actually missed a question on the Harrick Jr. Final Exam, means that my entire week has been one of humiliation and despair. I SUCK !!
Posted by Steve Smith at 11:41 AM No comments:

First of all, the fact that a criminal defendant has claimed that he provided several baseball superstars with the juice should be taken with a grain of salt. The bigger the story he can tell in court, and the bigger the names he can bring down, the more leniency the court will grant him when it comes time for sentencing. In that sense, Barry Bonds should be given the same benefit of the doubt that Lance Armstrong was given.

Second, any lawyer who puts out a statement that his client "never knowingly" did something should be disbarred for rank incompetence, or even worse, made to practice in the field of workers comp. If an attorney is going to be that stupid, why not just put out a statement saying that there is "no controlling legal authority" to implicate your client and be done with it. Far better for Sheffield's attorney to have just kept his mouth shut, or at least said that his client will have no comment on what was or wasn't said to the Grand Jury.

Third, steroid use in baseball will be The Big Story for the next year, and will probably color how fans eventually look back at the last decade in the sport. Obviously, Bonds' single-season home run record will come into question (as will McGuire and Sosa, btw), but he has had such an impressive career that he will still be viewed as one of the all-time greats. Less fortunate will be players like Sheffield or Giambi (or Nomar, or Piazza, or any other player who gets caught up in this net), who may not have a pre-steroid portion of their career they can point to if they get implicated. Any well-sculpted ballplayer from the last fifteen years is going to be tainted by rumors of steroid use, regardless of guilt, in much the same way that the late Flo-Jo was after the 1988 Olympics. Sheffield, for example, with three consecutive MVP-candidate seasons, was just starting to put together a legitimate case for Hall of Fame consideration, which the steroid rumors may have irreparably damaged. This is a scandal the sport can ill-afford.
Posted by Steve Smith at 12:05 PM No comments:
Prof. Johnson presents: "The Passion of Elvis".
Posted by Steve Smith at 11:27 AM No comments:

Contrary to my post last week, the Seeds didn't open for the reclusive Ken Layne & the Corvids last Thursday. No matter; it was still worth the $7 cover to see the opening night of the "Minotour". The group keeps getting tighter, and the night was marred neither by Matt Welch's solo cover of "Only Women Bleed" nor by the obscenity-laced spat over welfare-reform between Mickey Kaus and Sky Saxon that interrupted the concert for ten full minutes until the police finally arrived. Saturday, in Huntington Beach, they were even better, debuting three new songs, including one kick-ass blast that sounded like an unholy mixture of Johnny Cash, Buck Owens, and "Him or Me" by Paul Revere and the Raiders. Hopefully, a "Maxotour" is in store for the rest of the country real soon. And by all means, if you go see them, print out one of their flyers....
Posted by Steve Smith at 11:05 PM No comments:
Any doubts I may have had about John Kerry being a better president than George Bush were resolved by his answer to yesterday's debate's final question: Is God on our side? A good leader often tells people what they don't want to hear, and Kerry's answer actually seemed to have been generated out of some thought on his part. There was none of the phony religiosity that one gets out of W, who clearly sees matters of faith as a prop he can use to pick up Red State votes, rather than something that actually has meaning to him. I'm still voting for the ambulance chaser tomorrow, but my respect for the frontrunner has gone up enormously.
Posted by Steve Smith at 1:19 PM No comments:

I certainly wouldn't begrudge her the Oscar she won tonight, but does anyone else think that Charlize Theron maybe was under a heatlamp for too long this week?

UPDATE: Nope, turns out she just overdid the make-up. Check out this photo from the night before, at the Independent Spirit Awards. I'm told that an exaggerated "tan" is often used to cover up acne problems, an especially acute problem when a significant share of the audience (particularly in Hollywood) is tuning in to the show via TV sets of the high-definition variety. Anyway, she's not necessarily a candidate for a melanoma...whew. 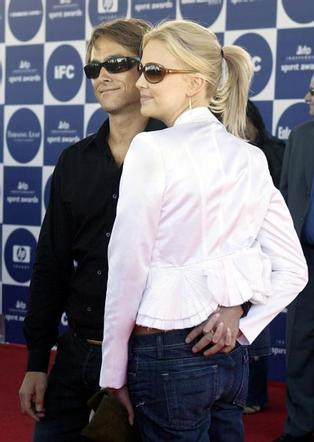