Kerning with Boys: Not surprisingly, LGF defends Foley, Roger L. Simon wonders what the big deal is, Hugh Hewitt embraces the morally relativist approach and James Lileks believes hitting on teenage boys became more forgivable after September 11. Leave it to Michelle Malkin to be the Voice of Integrity on the Far Right.
Posted by Steve Smith at 11:49 PM No comments:
"An important symbolic gesture?" Remember that border fence Congress authorized last week (and signed into law today by the President) amid much to do. Looks like it's going to get built roughly around the time that the Ninth Ward is finally repaired by the feds, or so says one of its prime supporters. It's funny, but last week the fence and the habeus corpus abolition were supposed to be the silver bullets that would sink the Democrats (link via Charles Kuffner), and now they're just commas.
Posted by Steve Smith at 4:53 PM No comments: 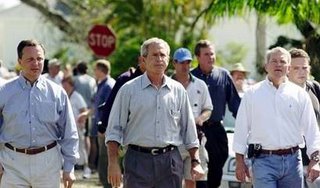 The Trinity: Photographic evidence that Jesus loves me...
Posted by Steve Smith at 12:02 PM No comments:

Requiem for the Other Man on the Medal Stand:

"His role was to show everyone that it's not a black thing, it's a human thing. It's not about colour, it's not about, you know, wealth or lack of wealth, it's about having an understanding and love for humanity. You know, it's two black guys, but it was three human beings up there, total."

"...as a humanitarian, one of the greatest men I've ever know. And I think the love of what he stood for will be remembered throughout all time. And Peter certainly should be put on the top of a gold medal stand and not on the bottom...."

"It was like a pebble into the middle of a pond, and the ripples are still traveling."

--Peter Norman (1942-2006)
Posted by Steve Smith at 9:49 PM No comments:
Every four years Californians are treated to a governor's race featuring some of the most inept campaigning this side of Robert Shrum, and this year is no exception. Since Pete Wilson and Dianne Feinstein battled it out in 1990 in one of the closest races in history, the losing candidates in the Golden State have been Kathleen Brown (1994), who started out the race twenty points ahead of Gov. Wilson, only to somehow run out of money with ten days to go, thereby forcing her to go dark on any last-second media buys, Dan Lundgren (1998), who managed to lose to Gray Davis by an even larger margin than Brown had four years earlier, Bill Simon (2002), who lost to Davis even though the governor was so unpopular that the recall efforts would begin almost the day after, and now Phil Angelides.

Angelides may take the cake as the most inept nominee of a major party ever to seek the governorship; the only campaign that really comes close would be Pat Brown's effort against Ronald Reagan in 1966, and even that has to be seen in the context of his having won twice before. Right now, Schwarzenegger is clobbering him by anywhere from ten to seventeen points, according to whichever poll you believe, but more troubling may be the anemic showing of other Democrats seeking statewide office (see here and here), most of whom are not being challenged by charismatic and/or liberal Republican opponents.

Angelides' ineptitude is of the quality that one begins to wonder how he can be removed from the ballot, if only to save the party from a monumental debacle in five weeks. Schwarzenegger has labeled him a traditional "tax-and-spend" liberal, which isn't shocking; what's shocking is that the only response from the Democrat has been to air ads that replay the governor's endorsement of President Bush two years ago, a strategem that has almost no effect on swing voters. The voters will give liberal candidates some benefit of the doubt if, at the very least, they connect tax increases with tangible governmental results. But if Angelides supports universal health coverage, or rebuilding the levees in the Central Valley, or lowering teacher-student class sizes in public schools, that message hasn't gone out to the voters. He has yet to give anyone a positive reason to vote for him, a rationale for why the voters would benefit by having him assume office in December.

Moreover, he has generated almost no passion at the "netroots" level, which is even more surprising considering how many important bloggers are from this state. The sort of intensity that is endemic when the blogs focus on a particular race has been absent here, even though California is the largest state, and the enthusiasm that the internet can generate is absolutely necessary in mobilization. As a consequence, low voter turnout by California Democrats may very well lead to a disaster on Election Day, both at the state level and in the battle to take control of the House of Representatives.
Posted by Steve Smith at 2:12 PM No comments:
Mickey Kaus has reason to believe that the GOP may well retain the Foley seat. The most interesting thing about the poll is that 43% of the voters in the district would vote for Foley even before being told that his votes would be transferable to the Republican replacement.
Posted by Steve Smith at 1:54 PM No comments:

Some interesting ties between Cong. Foley and the Church of Scientology, courtesy of Wonkette.
Posted by Steve Smith at 2:05 PM No comments:
Ladies and gentlemen, our scandal du jour is Foleygate, not Predatorgate. In order for the "-gate" suffix to properly identify a scandal that will transcend partisan and ideological interest, without first glazing over the eyes of those who aren't politically-obsessed, it has to start with a banality(eg., Water-gate, Monica-gate, Contra-gate, etc.) When you start it with a loaded term, you run the risk of killing the outrage, as liberals did when they began calling the Plame Leak controversy, "Traitorgate". If the word that precedes "-gate" is inherently criminal, there's no point in using the suffix in the first place.

UPDATE [10/3]: But this is a winner--La Cage Aux Foley, courtesy of Little Green Firedogs.
Posted by Steve Smith at 12:05 PM No comments:

A "No brainer" indeed: So much for the claim that Democratic opposition to Schwarzenegger's reapportionment scheme would backfire...with Angelides cratering and a singularly undistinguished set of statewide candidates indicating that the Golden State may countertrend towards the GOP, Pelosi's gambit last year may be what assures the party of a majority of House seats after November 7.
Posted by Steve Smith at 10:43 AM No comments:
More Perverts? The Page Scandal has all the makings of the GOP version of the House Bank Scandal, a very simple, easy-to-understand symbol of the corruption at the heart of one-party dominance. If "Republican Congressman" becomes synonymous with "Catholic Priest" in causing a shudder in our collective subconscious, the party may be doomed.
Posted by Steve Smith at 9:23 AM No comments:
Newer Posts Older Posts Home
Subscribe to: Posts (Atom)