1. The editors of the Dallas Morning News have a rather entertaining blog, in the tradition of the National Review Online. My post two weeks ago on "Norquist's Bathtub" was referred to one of their editors (thankfully, the prediction that the death toll from the hurricane would "dwarf" that of 9/11 has not been borne out to date), so I'm getting a big hunk o' Lone Star link-love today.

2. My take on Bush's speech Thursday night: not bad. In fact, it was perhaps the best he's sounded since right after 9/11; acknowledging that the buck ultimately stops with him will surely help him politically, as it is a refreshing change from his typical avoidance of responsibility. Focusing in on the racial aspect of the disaster was especially important. The problem, of course, is that his initial proposals indicate that nothing will change. Karl Rove is in charge of the Gulf Coast Reconstruction, the housecleaning he needs to do at FEMA and DHS has not started, and his vow not to raise taxes while cutting spending elsewhere to pay for reconstruction has the tinny sound of a man trying to rearrange deck chairs on the Titanic; if rebuilding New Orleans is to be the trade-off for cutting funds that might prevent a disaster elsewhere, that is not acceptable. Liberals must increase the pressure on this government.

3. Matt Welch has converted his blog into a daily diary of the Angels for the final weeks of the season. Those who wish to follow the missteps of L.A.'s pursuit of the AL West title should check it out.

4. A friend of mine from Georgia calls the annual Florida-Tennessee battle, the "Meteor Bowl"; he hates both the Gators and Vols, and for him the optimal result would be for a meteor to crash into the stadium during the game. That's kind of what I thought of the Hitchens-Galloway tussle in New York City this past week.

5. Speaking of college football, I'm off to Over/Under for some Santa Monica fun. See ya Monday.
Posted by Steve Smith at 12:48 PM No comments:

Read this, and I dare you to tell met that you can drive a nail up this guy's ass with a sledgehammer.
Posted by Steve Smith at 4:05 PM No comments:

The worst team nickname in the world. [link via Ragged Thots]
Posted by Steve Smith at 4:53 PM No comments:
After three days of testimony, the one thing I can safely conclude about John Roberts is that he's one hell of a lawyer. Slick, evasive, brilliant, mendacious, smooth as silk; he's Thomas Dewey without the moustache. Trying to get him to answer a question truthfully is like attempting to crack someone's skull open with a pillow, yet I doubt anyone could point to a single false statement he made this week.

I'm skeptical there'll be any public groundswell demanding that Roberts' confirmation sail through the Senate. If he doesn't want to give a straight answer to questions, or if he continues to assert whatever lame-ass privilege he's using to hide his records from his time at the Solicitor General's office, then filibuster him.

That would accomplish several things: it would be a symbolic sign of defiance aimed at our lame duck President, at a time when public contempt for Bush is at a level not seen since the final days of Nixon; it would signal that every nominee will have to face a battle, and a more conservative appointee will be on notice for next time(and Roberts' deceptiveness aside, his public record indicates he's a bit closer to the center than the person he's succeeding; at a time in his career when Rehnquist was trying to intimidate black voters into forgoing their franchise, Roberts was working behind the scenes to overturn anti-gay legislation); and it will allow swing-state and Red State Democrats in the Senate the chance to publicly distance themselves from the progressive wing by voting against the filibuster. It's a no-lose situation.
Posted by Steve Smith at 11:58 AM No comments:

YBK [Part 18]: Not one, but two of the largest airlines went double-toothpicks within minutes of each other. The new bankruptcy laws are going to be brutal on business reorganizations, so expect to see this story replayed quite a bit in the next four weeks. In the meantime, what does this say about airlines when three of the four biggest airlines in the country (plus U.S. Air) are currently in Chapter 11? Can someone say "Amtrak"?
Posted by Steve Smith at 4:24 PM No comments:
Labels: bankruptcy, YBK

Because 10,000 would be unforgivable: There's something positively odious about complaining that not enough people died along the Gulf Coast the past two weeks.
Posted by Steve Smith at 2:35 PM No comments:

Question for Mr. Kinsley: What planet do you live on? I dare you to name anyone who has lived on the West Coast (particularly California), and experienced at least a 6.0+ quake, who does not think about The Big One constantly (ie., 8.0+ on the Richter Scale). I think about it every time I drive under a freeway overpass, or walk next to a brick building, or wake up at 4:00 in the morning. I think about it whenever I see glass or china sitting precariously on a shelf, or turn on a flashlight. Earthquakes are part of the reality of living in LA, and the certainty that a major quake will rattle us again in the near future is something everyone thinks about. And I think its fair for any Angeleno to make the assumption that our government will be accountable in the event some major building or piece of infrastructure isn't seismically capable of withstanding such a shock.

Did I ever think about New Orleans being wiped off the face of the earth because of a flood before August 29, 2005? In all honesty, no; I had never studied the topology of that region. But I assume that many, if not most, Louisianians did, largely because major floods occurred every so often. They had a right to assume their government was looking after them, and that predictable threats, such as the corruption of the levees, were going to be dealt with.

And to simply shrug at a calamity like Hurricane Katrina or the 9/11 attacks and say that it's human nature not to focus in on the problem until its too late is rather lame. The state and local governments knew enough to wargame contingency plans, however ineffectual they turned out to be. The Army Corps of Engineers knew that the levees probably wouldn't be able to survive a Category-4 hurricane as far back as 2000, and the local newspaper predicted the devastation that would occur two weeks ago all the way back in 2002, facts which Kinsley acknowledges. Money was budgeted towards doing something to shore up the levees, but not nearly enough. The people who needed to know knew, but they just couldn't get the people who had the power to do something about it to act accordingly. And that's unforgiveable.

We don't expect government to guarantee that all disasters be averted. But it's not unfair to demand that avoidable, predictable mistakes not be made. And treating FEMA like a patronage cow, the federal version of state boxing or parole boards on which to stack cronies and hacks, is inexcusable.

UPDATE: Reader MK informs me that Michael Kinsley actually was in town for the '94 Northridge quake. I guess the collapse of the 10 Freeway didn't leave much an impression....
Posted by Steve Smith at 4:55 PM No comments:
Gone fishin'.... 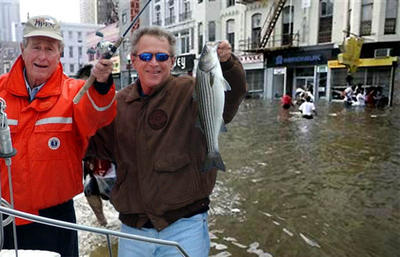 Posted by Steve Smith at 3:01 PM No comments:
A blackout has wiped out electrical service to most of Los Angeles (that is, the city; the greater metropolitan area, including Beverly Hills, Long Beach, and Santa Monica, gets its power from another source, and all systems are normal in those cities). Sherman Oaks, where I live, is dark, but Woodland Hills, where I work, has been unaffected. If that changes, I won't let you know, because, well, I won't have power to blog anything.
Posted by Steve Smith at 2:48 PM No comments:

Quote of the Day:

I watched Fahrenheit 9/11 last night. I'd seen it in the theater, but I'd brought Apple, and she was tiny, so I left like 70 times because I was trying to calm her down and I missed the end and stuff. And now, since the film has finished, what's going on in Iraq and what's going on every day? And you see that footage of Bush landing and saying 'Mission accomplished' and he just looks like the biggest moron of all time.