Finally, an article in the mainstream press about blogging that doesn't treat the medium like it's some bizarre tribal mating ritual. The focus is on those unfortunate many who become fodder for erstwhile friends who blog, even though they aren't public figures. I think I've successfully avoided that problem, since the few friends I have are either too stupid to know how to use a computer, or already understand that most of the stuff I publish about my life is bullshit anyways.

Posted by Steve Smith at 12:20 PM No comments:
How is it, exactly, that Halle Berry is the world's most beautiful woman, when she was famously only a first runner-up in the Miss U.S.A. pageant? Granted, it was seventeen years ago, but I doubt Christy Fichtner has aged that badly. 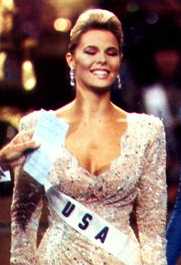 I was hoping that if I didn't write about last night, it never happened. That the Lakers were uninspired at the defensive end goes without saying. More interesting was how dominating San Antonio looked in Game 6. After losing back-to-back games, then getting a reprieve in the final seconds of Game 5, a lot of fans expected the Spurs to get blown out by the Lakers, but Tim Duncan, et al., seemed determined last night not just to beat the Lakers, but bury them. And bury them they did, particularly after an impressive 14-minute stretch of the third and fourth quarter when they scored on 18 of 22 possessions.

Last year, the Lakers were a game away from elimination, having just lost a game in Sacramento, due in large part to some questionable calls at the end of the game. When it was the Lakers turn to get the breaks (and the calls) in Game 6, the Kings players whined like schoolgirls. Of course, in Game 7 the refs bent over backwards to assist Sacramento, but the Kings couldn't hit their frees, and the Lakers pulled out another title. Last night, after a Game 5 partly decided on some questionable non-calls late, and with the expectation that the Lakers were going to turn on the afterburners again, the Spurs took the officials out of the game. They will deserve their likely championship.

UPDATE: A touching elegy from Tony Pierce. The best line comes at the end: "the fans were booing because the eggs are cold, the butters getting hard, and the jellos jiggling, except this time, for the first time in a generation, the jello was jiggling for thee."

Posted by Steve Smith at 3:54 PM No comments:
About a month ago, there were stories about how documents "uncovered" after the fall of Baghdad revealed that a major anti-war figure in British politics, George Galloway, was on Saddam's payroll, as well as showing that the French had provided intelligence about UN activities to Iraq (Galloway was on a short list of people that John Malkovich wanted dead awhile back). Quite a bit of damage was done as a result, both to Galloway's reputation and to France's policy of opposing military action. Well, it turns out those some of those documents were (surprise, surprise) obvious forgeries. [link via Daily Kos]

Posted by Steve Smith at 10:00 AM No comments:
Labels: Iraq
The story of the renegade Texas Democrats goes from comical to sinister....

Posted by Steve Smith at 9:29 AM No comments:

Because David Duke doesn't blog:
Kausfiles desperate attempt to connect minority hiring to the Jayson Blair story has led to this approving link to Ilsa, She-wolf of the SS. I mean, if you're trying to slam the honesty and integrity of a third party, or discredit policies in which unqualified candidates are given a leg up on the competition for reasons other than merit, Ann Coulter is not exactly your ideal "go-to" source.

You knew this was going to happen...as soon as the war ended, the Volkisher Beobachter would report that Salam Pax (in case you've forgotten, he was the blogger who was reporting live from Baghdad during out latest adventure) was actually an agent for Saddam. Of course, there's no evidence yet....

Posted by Steve Smith at 10:12 PM No comments:
Bloghomie Tony Pierce guarantees a Laker triumph over San Antonio in Games 6 and 7. PRAISE THE LORD !!!

Posted by Steve Smith at 5:59 PM No comments:

Posted by Steve Smith at 10:11 PM No comments:
Hitchens' betrayal of Sidney Blumenthal ("under the spreading chestnut tree, I sold you and you sold me") may have been his nadir, but this latest column merely shows how comfortable he has become speaking power to truth. Apologias for sleazeball Iraqi exiles I suppose are one thing, but to explain away the tolerance of Nazis in post-war Germany, then use it as an excuse for not aggressively pursuing human rights criminals within the Baathist Party is a step away from the madhouse.

Anytime the sports scene in Southern California is reviewed, the Mighty Ducks of Anaheim have usually been treated like the red-headed stepchild. Only two prior playoff appearances in the last ten years, there was no reason that this year would be any different. Unbelievably, the Ducks are now just two games away from the Stanley Cup Finals, and an opportunity to take on either New Jersey or Ottawa for the one title to have alluded the state of California.

Posted by Steve Smith at 4:19 PM No comments:
As long as we're talking about who belongs and who doesn't belong in a PGA golf tournament, why do male golfers like Vijay Singh, Scott Hoch and Nick Price have a problem playing with perhaps the greatest female golfer of all time, Annika Sorenstam, but not playing with some geezer like Arnold Palmer or Billy Casper at the Masters every year? She's much more likely to the make the cut...btw, check out Off-Wing Opinion on this story; he's covering like it like JS Giguere covers a loose puck in the crease.

Posted by Steve Smith at 2:08 PM No comments:
I wonder why this sort of guerrilla tactic isn't used more often by a minority legislative party. A far shrewder political leader, the late Jesse Unruh, once locked the doors of the California State Assembly in the mid-60's precisely so the GOP caucus couldn't walk out. In any event, Texas Republicans are now the laughing stock of the nation, victims of the arrogant abuse of their majority.

Posted by Steve Smith at 1:36 PM No comments:

Most of the attention devoted to this story concerned the initial decision to dock the workers in the audience a day's pay for listening to Bush's speech; after public outrage made itself felt, the company relented, and now the employees of Airlite Plastics will not lose a dime for being used as background props in the President's latest economic scam. However, more Democrats should be pissed at the idiot representing their party in the US Senate, Ben Nelson. This tribune of the underclass claimed he

"...was a little surprised by the company's decision regarding compensation for workers during Bush's visit.

'That could very easily undermine the president's message, but I don't want to be an ungracious host,' Nelson said from his home Sunday. 'If this is Airlite's way of handling it, that's between them and their employees.'"

At least the working men and women of Nebraska know they have a friend in Ben Nelson.

Hope everyone had a happy Mother's Day. I got to watch very little of the Laker game this afternoon, as I had to run a bunch of errands and do a little work at the office. After the rout on Wednesday, I may have been conditioned to expecting that Game 4 would be the final game of the series, and I didn't have much interest in seeing my beloved team swept by the Spurs. After the Lakers blew out San Antonio in Game 3, my interest in the series was rejuvenated, but my mental clock was not reprogrammed. So I listened to most of the game on the radio, as the Lakers came from 16 back in the second quarter to win.

I did watch the final four minutes of the game at home, then did the usual Mothers Day thing: movie (The Dancer Upstairs) and Chinese food (good stuff, too; not Panda Express). The flick was actually quite interesting. Directed by John Malkovich, it features an Hispanic cast, with a South American political theme (a fictionalization of the Peruvian Shining Path movement), but with English dialogue. Malkovich is clearly someone who was changed by the events of September 11; anyone looking for a good neoliberal call-to-arms against terrorism could do worse than start with this movie.

UPDATE: According to this review, Malkovich apparently had this film in the can before 9-11-01, providing a more interesting context for his message.

Posted by Steve Smith at 9:48 PM No comments:
The principal justification Bush gave the international community for starting a preemptive war with Iraq was the claim that Saddam Hussein was in possession of "weapons of mass destruction". The legalistic figleaf the "Coalition" used to commence hostilities, U.N. Resolution 1441, relied exclusively on that claim; Saddam's human rights record and his ties with terrorist organizations hardly factored in. Foreign opposition, from Russia, France and Germany, centered on skepticism about U.S. claims about the development and extent of the Iraqi program.

Well, today, the other shoe has apparently dropped. The 75th Exploitation Task Force, the principal unit designed to uncover the wherabouts of the Iraqi WMD program, is dissolving, having found nothing to date. According to the Washington Post, "Army Col. Richard McPhee...said he took seriously U.S. intelligence warnings on the eve of war that Hussein had given 'release authority' to subordinates in command of chemical weapons. 'We didn't have all these people in [protective] suits' for nothing, he said. But if Iraq thought of using such weapons, 'there had to have been something to use. And we haven't found it. . . . Books will be written on that in the intelligence community for a long time.' "

Looks like someone owes Jacques Chirac and the cheese-eating surrender monkeys an apology.

Posted by Steve Smith at 12:43 PM No comments:
Labels: Iraq
A big story back east concerns the travails of NY Times reporter Jayson Blair, who was fired after it became known he had included fabrications in close to 50 articles he had written in the past few years. Since Blair is black, this story is being spun as an example of the evils of affirmative action: hire a non-white reporter, and this is what happens. This is the acceptable face of conservative racism today: make a speech where you apparently yearn for the days when blacks and whites attended separate schools, and you will suffer disgrace; stereotype minorities as incompetent idiots, and you will get your books published and columns printed.

Never mind, as both CalPundit and Atrios point out, that there have been many more examples in recent years of white reporters inventing stories and fabricating sources; if one black reporter does it, than all minority job applicants should be considered suspect. If this is considered mainstream opinion among conservatives, it's no wonder that the GOP continues to be led by the likes of Tom DeLay, Trent Lott, and Rick Santorum.