Quickie TV Trivia: Who are the only two actors to have portrayed both the archvillain on Batman and the murderer on Colombo? Answer via e-mail....
Posted by Steve Smith at 11:29 PM No comments:
Los Angeles [A] 6, Cleveland 5: First baseball game of the year, compliments of Welch pere, ended in dramatic fashion. Angels score once in the 8th, 9th and 10th innings, the winning run coming on a solo blast by Orlando Cabrera down the left field line, to overcome some uncharacteristically spotty pitching by Jarrod Washburn and some superlative defense by Indians outfielder Coco Crisp (and is that a great name or what?). Great seats, decent ballpark chow, and, most importantly, a vintage Rally Monkey comeback; also, I lost my wallet (second time in three seasons that I've had wallet problems at ballgames), only to have it quickly returned with credit cards intact, a phenomenum unlikely to occur at Chavez Ravine.
Posted by Steve Smith at 4:06 PM No comments:

Shape of Things to Come:

"Are there no prisons?" asked Scrooge.

"Plenty of prisons," said the gentlemen, laying down the pen again.

"And the Union workhouses?" demanded Scrooge. "Are they still in operation?"

"They are. Still," returned the gentlemen, "I wish I could say they were not."

"The Treadmill and the Poor Law are in full vigour, then?" said Scrooge.

"Oh, I was afraid, from what you said at first, that something had occurred to stop them in their usual course," said Scrooge. "I am very glad to hear it."

"Not all moral issues have the same moral weight as abortion and euthanasia. For example, if a Catholic were to be at odds with the Holy Father on the application of capital punishment or on the decision to wage war, he would not for that reason be considered unworthy to present himself to receive Holy Communion. While the church exhorts civil authorities to seek peace, not war, and to exercise discretion and mercy in imposing punishment on criminals, it may still be permissible to take up arms to repel an aggressor or to have recourse to capital punishment. There may be a legitimate diversity of opinion even among Catholics about waging war and applying the death penalty, but not, however, with regard to abortion and euthanasia."

--Josef Cardinal Ratzinger, reaching out to "Cafeteria Catholics" in 2004
Posted by Steve Smith at 8:03 AM No comments:

"I am personally convinced that the constant presence in the press of the sins of Catholic priests, especially in the United States, is a planned campaign, as the percentage of these offences among priests is not higher than in other categories, and perhaps it is even lower... In the United States, there is constant news on this topic, but less than 1% of priests are guilty of acts of this type...The constant presence of these news items does not correspond to the objectivity of the information nor to the statistical objectivity of the facts. Therefore, one comes to the conclusion that it is intentional, manipulated, that there is a desire to discredit the Church. It is a logical and well-founded conclusion."

Josef Cardinal Ratzinger, December, 2002.
Posted by Steve Smith at 4:53 PM No comments:
In case you're interested, Benedict XV was the second Pope ordained in the 20th Century, almost concurrently with the outbreak of World War I. For Catholics frustrated by JP2's "Veterans Committee" philosophy of inducting saints by the bushel, Ratzinger's forebearer beatified only three saints during his decade in the papacy, one of whom was Joan of Arc.
Posted by Steve Smith at 12:24 PM No comments:
U.S. Not World Soccer Power: How on earth did this get past the four layers of factchecking they supposedly have at the LA Times (under "World Cup Winner")? Are we next going to see columns celebrating past NBA championships by the Clippers?
Posted by Steve Smith at 10:29 AM No comments:
Year of the Rat: Josef Ratzinger, whose tenure as the head of the Congregation for the Doctrine of Faith has been characterized more by a reliance on theocratic rationalization than on theological principles (for a mind-numbing example of Ratzinger's "thinking" and his overuse of banalities and strawmen, check out the sermon he gave yesterday), has been elected Pope. Ratzinger, whose resemblance to British character acter Ian McDiarmid will no doubt be much commented on over the next month, will be known as Pope Benedict XVI.
Posted by Steve Smith at 9:51 AM No comments:

Suffice it to say, any day in which the house organ for the MSM has NaziPundit on its cover, proclaiming her to be "Ms. Right", the voice of American Conservatism, is a very, very good day for liberals. This is the sort of adverse publicity for the other side that you just can't buy....

UPDATE: She might have a point about the cover photo! [link via WWDT]
Posted by Steve Smith at 3:40 PM No comments:
Worried that the C of C is going to pick Ratzinger, or some other sexist reactionary as the next Pope? Well, at least he won't be as bad as some of the characters I described here two years ago.
Posted by Steve Smith at 2:04 PM No comments:
Asshole Watch: The skinheads and chickenhawks at LGF are having a field day celebrating the death of Soros-funded socialist hatemonger Marla Ruzicka. 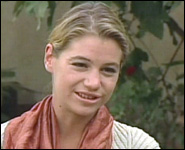