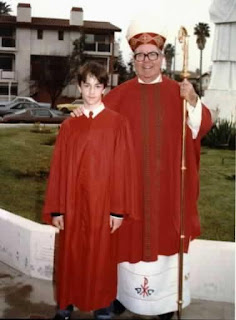 Hands down, the worst video ever:

It's safe to say his career was never the same after this debacle.
Posted by Steve Smith at 4:16 PM 1 comment:
Since we're coming up on the fourth anniversary of the war, I thought this would be a good time to look back at what I wrote the day the war started, at least to see how prescient I was at the time:

D-Hour has passed, and our country is about to go to war. Here are a dozen things we need to keep in mind:

1. Saddam Hussein is bad, and he has bad intentions;

2. Iraq has not attacked us, and is not presently attacking its neighbors;

3. Iraq has not been shown to be involved with the attack on September 11;

4. For the first time in our history, we are attacking a nation that is not engaged in hostilities with us or its neighbors; in fact, we are not even claiming a pretext that they are, as we did with Mexico and Spain in the nineteenth century;

5. There has been no failure in the inspection regime under Resolution 1441 to require that we go to war this instant;

6. The U.S. withheld evidence from the inspectors that might have made discovery of WMD’s possible, but didn’t provide it so as to not minimize the case for going to war;

7. The difference between the relative strength of the US and Iraqi armies is enormous; we are literally going to be tearing the wings off of a fly;

8. Many thousands of civilians will be killed;

9. Most of what we will hear being reported on American television will be untrue, especially in the first few days of conflict; overseas reporting, even Al Jazeera, will be more accurate;

10. No matter how lopsided the battles will be, each soldier and sailor has family back home, who will be worried no end over the fate of their loved ones, EVERY DAY OF THIS WAR;

11. We will discover the full extent of Hussein’s brutality and tyranny when Baghdad is “liberated”;

12. History will not look kindly at us for our prevarications used to justify going to war, for our manipulation of the tragedy of 9/11 to justify these acts, and for the bloody-minded lust that this Administration has pursued this war.

I am amazed at how well that held up, considering that I don't make any claims to being a foreign policy expert, and especially considering how bad my predictions usually are in those things that I do pretend to have knowledge, like sports. Of those, only number six, with its assumption that there were WMD's in Iraq, seems to have fallen short. And while I correctly predicted the cakewalk our army would have getting to Baghdad, I didn't foresee the size and scope of the subsequent insurgency, possibly because I couldn't believe the Bushies were so completely devoid of competence.

Still, not too shabby....
Posted by Steve Smith at 1:14 PM No comments:
Labels: Iraq

The idiotic convention of affixing "-gate" to any bad act by a government official (ie. "Traitorgate", "Filegate", etc.) proceeds apace with yet another scandal involving the Bushies.
Posted by Steve Smith at 10:50 AM No comments:

The Libby Verdict: Guilty on four charges of perjury and making false statements to the Feds. Sullivan and Drum react.

The conventional wisdom that Libby will draw out the appeals until after the 2008 election so he can get a pre-inaugural pardon from George Bush before he leaves office is probably correct, but it hardly matters. Libby doesn't seem like a guy who's going to rat out his superiors anyways, so the prosecutor's ability to get him to turn state's evidence is diminished, a reality Fitzgerald seemed to recognize at his press conference after the verdict. Since the only reason for Libby to lie the way he did in the first place was to protect Dick Cheney, anyone with an IQ in double digits can deduce that this whole controversy resulted from the Veep's desire to cover up his role in the fabrication of pre-war intelligence.

By itself, that's impeachable. We don't need Scooter Libby's testimony in some future criminal case to make that stick. Pardoning Libby will be the final nail in the coffin of the Bush Administration's historical legacy, that of a cabal which stressed certitude in the face of doubt, at the cost of many thousands of lives and, potentially, the greatness of the American experiment.
Posted by Steve Smith at 3:47 PM No comments:
Charter Schooling: Those who call for privatizing our public educational system might well examine four model schools from back east:

The N.C.A.A. announced Monday that it would no longer accept transcripts from two schools that had sent dozens of talented athletes to high-profile college athletics programs.

Kevin Lennon, the N.C.A.A. vice president for membership services, said that Lutheran Christian Academy in Philadelphia and Prince Avenue Prep in Pickens, S.C., which use curriculum from Accelerated Christian Education, did not have a high enough standard within that curriculum. Neither school was given “model” or “quality” status by the organization, which is why the N.C.A.A. said it would no longer be accepting transcripts from them.

Records from American Academy High School in Miami and the now-closed Florida Preparatory Academy in Port Charlotte, Fla., both of which did not respond to repeated N.C.A.A. requests for information, will also not be accepted.

Darryl Schofield, the coach at Lutheran Christian, said that his school had become an unfair target of the N.C.A.A.

“This is ongoing, ridiculous and stupid,” Schofield said of the N.C.A.A.’s decision. “It’s a waste of my time.”

He said he did not know about the latest decision until a reporter showed him the N.C.A.A.’s news release Monday. He said that the school changed locations and that the person at the community center where it used to be was throwing away its mail. Lennon said Lutheran should have informed the N.C.A.A. of the move.

Lutheran Christian Academy and numerous other prep schools came under increased scrutiny last year after investigations by The New York Times showed that athletes were receiving high grades for little or no work. Four players told The Times that Schofield was their only teacher and that they were not required to attend classes.

Nothing brings back memories of school days more than thinking of the community center where your dear alma mater was situated.
Posted by Steve Smith at 2:58 PM No comments:
The 60's, as we've come to know them, wasn't hippies in tie-dyed shirts and nude fans sliding in the mud at some mega-rock festival at an upstate farm, or Sgt. Pepper's Lonely Hearts Club Band, or anti-war demonstrations, or black men in afros and berets demanding to off the pigs.

This was the real 60's, in all its great and terrible beauty:

Romney-Coulter 2008 ?!? Apparently, it's under consideration:


And always remember, "we're not Sunni and Shia here."
Posted by Steve Smith at 5:24 PM No comments:
Things to be proud of:

I have been called -- my kids are all aware of this -- dumb, crazy man, science abuser, Holocaust denier, villain of the month, hate-filled, warmonger, Neanderthal, Genghis Khan and Attila the Hun. And I can just tell you that I wear some of those titles proudly.

--Sen. James Inhofe [R-OK]. It takes a special quality to surpass Ann Coulter as the most frightening and loathsome figure to speak at the Bundist Rally CPAC convention last weekend. Inhofe continued to channel his inner David Irving before an enthusiastic crowd, calling man-made global warming the "greatest hoax ever perpetuated on the American people," and denouncing the Bush Administration's recent decision to list polar bears as an endangered species.
Posted by Steve Smith at 7:59 AM No comments:
Newer Posts Older Posts Home
Subscribe to: Posts (Atom)