The CW on the final episode has gone from WTF? to Brilliantly ambiguous !! to Tony got whacked, and now it seems to be settling back down to the second reaction. Since the most important message any work of art can express is not what the artist intends, but what the audience perceives (which is why "Born in the U.S.A." will always be an upbeat patriotic fight song, not an anti-war jeremiad), let me give my two cents on how the Sopranos ended last Sunday.

As in every TV show, there is an invisible character at the table munching onion rings with Carmela and A.J.: the viewer. Since the beginning, we have been living vicariously through this mob family (both Tony's crew and, of course, his blood family), and we have had even better luck than Tony Soprano, who never went to jail and survived a bullet to his gut. We may have been taken by surprise on occasion, and there are some missing pieces we've never been able to sort out, like the whereabouts of that Russian, or who raped Dr. Melfi, but we've always escaped unscathed.

In that final scene, our luck ran out. Bobby Bacala told Tony at the beginning of the season that you probably never hear the shot that kills you, a clue that others have taken to mean that the sudden ending Sunday was the final moment of Tony Soprano's life; after all, didn't he flashback to that scene at the end of the penultimate episode. I agree that this was a clue, but not the heavyhanded one the consensus has taken it to be.

It is our perception that suddenly goes black at the diner. The scene is not shot through the eyes of Tony, or any of his family, but from our eyes (we even see Meadow trying to parallel park across the street, a vantage that is denied Tony). When the screen went black, and Journey's chorus was stilled, it was the viewer that was confused, just as a person shot in the brain must feel in the bewildering milliseconds before death. David Chase has allowed us to indulge our dark fantasies about living within the underworld, only to show us in the final moments that no one gets out alive.

We got whacked last Sunday. Probably by the guy in the Members Only jacket.
Posted by Steve Smith at 1:29 PM No comments:
Like a seven-year old on Xmas Eve, I impatiently await the return of Phoebe Nicholls to American TV, in a little over 24 hours. In the meantime, here's a bit of musical sherbet to cleanse the pallet:

Tom Lantos, for many years the principal foe in the Democratic caucus to recognizing that the "unfortunate human tragedy" that befell the Armenian people ninety years ago amounted to genocide, has gone all lieberman on Gerhard Schroeder and Jacques Chirac. His beef: that those ungrateful little weasels didn't back our adventure in Iraq. No doubt Sarkozy and Merkel are just chomping at the bit to involve ourselves in Bush's next big crusade in Iran.
Posted by Steve Smith at 1:41 PM No comments:

Two-thirds support citizenship avenue for illegal immigrants, according to the latest poll. Since racists and xenophobes have historically been more passionate about their cause than the more-inclusive majority (hell, it took a century to pass a civil rights bill worthy of its name), the backers of the current bill before the Senate still have their work cut out for them, but it is reassuring to know the scare tactics about "terrorists sneaking across the border" and the Mezkins plotting La Reconquista aren't working, even among Republicans. Too many people outside the South know immigrants whove worked their asses off in this country, or known of those who've volunteered to fight and die in the Persian Gulf, and thereby proved themselves to be more worthy of being an "American" than the a-holes who whine about "illegals."
Posted by Steve Smith at 11:47 PM No comments:

From a another era, a long, long time ago:

Posted by Steve Smith at 11:10 PM No comments:
You don't have to be a Richard Dawkins or a Christopher Hitchens to find this disturbing. Belief in creationist superstition is a bipartisan problem, too: while Republicans overwhelmingly reject the theory of evolution, Democrats only back the cause of science and reason in the field of paleontology by a slim majority. Yahooism didn't make the U.S. a great power or a beacon of freedom in the world, and it won't defeat terrorism, prevent pandemics, end poverty, or make sure the levees don't get topped in New Orleans the next time a hurricane hits.

UPDATE [6/12/2007]: Steve Benen disagrees, noting that independents back reason over mythology by an even greater margin than Democrats. I would note that considering how divided Dems are from GOPs on the war in Iraq, abortion, tax cutting, and even whether torture is an acceptable tactic in interrogation, the fact that 40% of the Democrats polled believe in the literal truth of Genesis shows how relatively unified the parties are on this issue. If a Republican can get 40% of the Democratic vote (or an "independent," like Joe Lieberman, they win.
Posted by Steve Smith at 9:15 PM No comments:
Not surprisingly, Abu Gonz still has a friend in the Senate Democratic caucus. If Lieberman were the Democratic nominee for President, and Ahnold was the Republican, how would you vote?
Posted by Steve Smith at 6:22 PM 2 comments:
Is nothing sacred?
Posted by Steve Smith at 9:04 AM No comments:
Labels: Phoebe Nicholls

UPDATE: Now that I've had a couple of hours to meditate, I've concluded that it was an ingenious ending, one that will have creators of Sopranos fan fiction going into overdrive. Was Tony whacked at that moment? Will he be indicted? Does he take over the Leotardo crew, or will there be further bloodshed? Sets up the long-rumored movie nicely....

UPDATE [6/11/07]: "Horror Davidowitz" spots a number of blatant lefty attacks subliminally hidden in last night's episode, concerning the nefarious Osamamobile.
Posted by Steve Smith at 7:10 PM No comments:
What does this Pulitzer Prize-winning photograph of Vietnamese children running from a napalm attack... 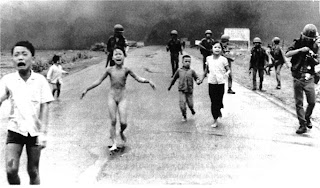 ...have in common with this picture, taken last week of a notorious celebutante headed back to prison? 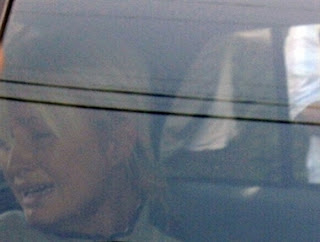 Answer here.
Posted by Steve Smith at 5:46 PM No comments:
And now, for your Sunday morning viewing pleasure: