CNN is reporting that Ronald Reagan passed away this morning. Having lost a grandfather to Alzheimer's, I can only express my sympathy to his family and loved ones at the travail they have gone through, and hope that his end came peacefully. There will be plenty of time later to discuss his legacy.
Posted by Steve Smith at 2:01 PM No comments:

Remember when a number of pundits predicted that l'affaire Plame was so "over" after her photograph was published in Vanity Fair? If the President has to hire an outside counsel, it's gotten serious.
Posted by Steve Smith at 6:32 PM No comments:
Some interesting factoids about Jennifer Hawkins, the newly-crowned Miss Universe 2004:

1. Last year, she finished third in the prestigious Bartercard Miss Indy 2003 pageant. If, for whatever reason, Bartercard Miss Indy 2003 and the first runner-up are unable to fulfill their obligations, Miss Hawkins would become the first woman in history to hold both titles simultaneously;
2. She was only selected to be "Miss Australia" last month by a Sydney modeling agency, thereby beating out last night, among others, Miss U.S.A., who was forced to compete in various pageants since last summer to earn her trip to Quito, Ecuador;
3. Her "original costume" was denounced by her hometown media as "unpatriotic", "boring", panicky and "universally, a disaster". Despite those props from her homies, she finished third in that segment, propelling her to the upset win;
4. By winning the crown, she became the first contestant outside of Latin America to win since 2000, and the first Miss Universe since 2002 to prevail without telling Miss Spain that she looked fat in her swimsuit just before she went on camera;
5. The new Miss Universe (on the right) has been quoted as saying that her ideal man is a bald, shlubby, 40-something left-of-center attorney who likes to down "a pint or two". 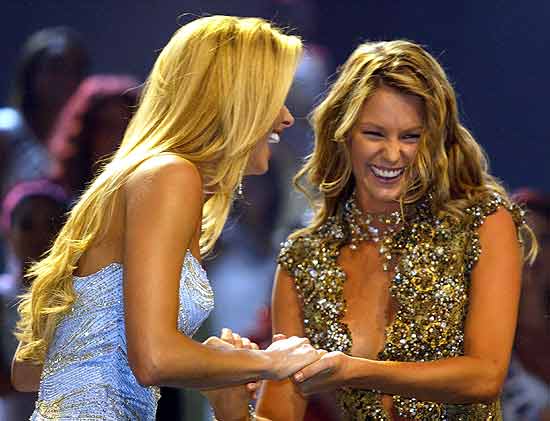 Posted by Steve Smith at 5:26 PM No comments:
Labels: Greatest Hits
Accountability, then and now: GA Cerny has an apt post about how a different Republican leader acted sixty years ago.
Posted by Steve Smith at 4:48 PM No comments:
A post about nothing: You ever had one of those days, when you set your mind to work on some big project, only to have your efforts come up completely empty. I spent yesterday chasing down a story that turned out to built on gossamer and string, concerning a throwaway remark made during the early panel at the AFI Saturday night, the one that involved the "Industry".

Allegedly, according to the panelists, a favorite film director of mine had worked "non-union" on one of his films, which, ironically, was a film about union organizing. I didn't get there until afterwards, so I had no way of knowing the context of what was said, and since the only person blogging that panel to have quoted that remark was either unable or unwilling to assist me when questioned, I decided to do my own factchecking. I had some free post-holiday time, and a jones to do some real, honest-to-goodness "journalism", like my hero, Matt Welch, so I dug into the story.

As the various journalism scandals of the past decade have taught us, from Judith Miller and Jeffrey Gerth to Jack Kelley and Jayson Blair, from the NY Times of coverage of Whitewater and Wen Ho Lee to the fictional stories about Al Gore claiming to have invented the Internet, people make s*** up all the time, and if you get suckered into believing something because someone in a position of authority says its true, you deserve everything else that happens. Gossip is fun to read, but it is often enough untrue (as this scathing piece, written by the "John Kerry Intern", attests), so it's always good to have a circumstantial basis for your story, as well as an eyewitness or three.

Since the person involved was, as I mentioned earlier, a film director, there would be one easy way to determine whether he was using non-union personnel on the shoot in question. I checked IMDB.com, and examined the various credits to find someone whose lack of experience prior to the movie would indicate that the crew member did not have a union card. No luck: each of the people I checked had extensive backgrounds at their positions. A newspaper column made mention of the same director's use of non-union personnel on a later film, but the context was different, it alluded to an interview over fifteen years old (which the article paraphrased from), and there was no explanation as to what his transgression was. I found no other websites that had even a tangential reference to the allegation, nor did I uncover any usenet groups that had bandied about the subject. If this was a Hollywood scandal, it doesn't appear to have generated much heat.

Finally, I asked my brother, who when he isn't running the hippest music club in town, is a Teamster organizer, whether the director in question had a bad rep when it came to such things. He pointed out that while it wouldn't surprise him to learn that an independent filmmaker, working on a tight budget, had been allowed to skirt union requirements, sometimes even with the tacit consent of the union, he really didn't know the answer (he wasn't involved with craft unions), but that if I really wanted to know, all I had to do was check for any grievances the affected unions would have filed back then. QED, if there were no grievances filed, then the parties probably had a pre-existing arrangement that allowed the director in question to skirt the rules.

That sounds like it might be hard work and heavy research, SO SCREW THAT. I'm not a journalist; I don't even have a library card, much less a subscription to NEXIS, so others will have to do the heavy lifting if they want the truth. Since I couldn't discredit the story after a thorough review of Google, and a ten-minute chat with my brother, each of the above subjects, from the director involved to the gossips who spread the story, shall remain nameless, but anyone who wants to uncover the details can easily do so. I'm a blogger, and not really a very good one at that, but at least I have enough self-respect not to gossip, nor to blindly post something based solely on how well I know my source. But if you ever want to know what I write about when I have absolutely nothing to write about, feel free to permalink this story.
Posted by Steve Smith at 9:38 AM No comments:

This being Memorial Day and all, I have a question that probably has relevance only to my fellow SoCals: are Dodger Dogs still sold at supermarkets? I'm quite sure that none of the local (ie., Sherman Oaks/Woodland Hills) stores have them...please let me know !!!
Posted by Steve Smith at 11:32 AM No comments:

"Armed Liberal" has a new nom de guerre....
Posted by Steve Smith at 10:37 PM No comments:
The American Cinema Foundation hosted its annual blogger panel at the AFI last night, affirming the notion that Los Angeles is to the blogosphere what Tobacco Road is to college basketball. Ninety minutes spent listening to the views and brainfarts of Matt Welch, Mickey Kaus, Charles Johnson, Roger Simon, "Moxie", and Kevin Drum, before a packed but non-violent crowd of my fellow pundit wannabees, trolls and derelicts, is always a great way to spend a Saturday night, especially with the Lakers tanking the way they did. More politically diverse than last year's panel, ranging from center-left to "little green-eyed monsters", but (sadly) with less input from those non-political sites that I feel represent the future of this medium, the focus was on the motivation of the panelists in using the blogging format to get out their message. Since each of the bloggers used a different path to get where they are, it served only to reinforce the point that if you want a lot of hits, you need to spend a lot of free time before a computer terminal. Local Mean Girl "Cecile" blogged the festivities in real time with exceeding precocity. Others attending included Cathy Seipp, Luke Ford, Emmanuelle Richard, Martin Devon, "Boi from Troy" and Amy Alkon.

Then afterwards, no blogapalooza could be complete without the after-party salon at the home of the eminent voice of Reason, Mr. Welch, and his lovely wife. The gorgeous "Moxie" enthralled the guests well into the wee hours with her wit and beauty, although she seemed to go out of her way to skewer a hypothetical loser as being the "bald, fat guy from high school". I guess I'm not her type; it's amazing how a woman can intuit that without ever visiting this site.
Posted by Steve Smith at 1:03 PM No comments:
Newer Posts Older Posts Home
Subscribe to: Posts (Atom)